The title of this post should be ‘How to Do Luxembourg City When You Only Have 24 Hours and Failed to do any Research’. That doesn’t really trip off the tongue, does it? It isn’t like me not to do my homework, but Luxembourg was a bit of a last-minute add-on to a visit to the German Moselle  so we just booked a hotel and jumped in. This is how we think you can do Luxembourg with very little time and even less knowledge…

When you are short on time, it makes sense to be centrally based. We stayed in Novotel Luxembourg Centre, based on the fact it was within walking distance of the main sights, had secure parking and that we have had many happy stays with Novotel.

Consider a Hop on, Hop off tour.

Not always a fan of the HoHo, but when short on time and knowledge they can be useful. We went ahead and bought a 24 hour City Sightseeing ticket. Being honest, the tour is a bit lacking on the sights. But, inexpensive and an easy way of getting from one attraction to another. The commentary was quite good for some background info on the city, too.

Originally built in 963 by Count Seigfried , the Casemates were developed over the years into a superstructure that was one of the most envied fortifications in Europe. Although much of the original structure has been razed, 17 km of tunnels remain, penetrating the rock at different levels and confusingly laid out in a series of interconnected areas and dead ends. This is a place to let the imagination run riot and you’ll get some great views to boot. Steep, narrow stairs, lots of climbing and uneven floors mean it’s not for the faint hearted or anyone with mobility issues.

Be Awed by The Grand Ducal Palace.

Wander up from the Casemates via the Fish Market ,this itself worth an explore with its narrow alleys, stairways and medieval feel, and end up at the Grand Ducal Palace. The town residence of the Grand Duke, this building has probably the most  beautiful façade in Luxembourg city. And that’s saying something in a city brimming with photogenic and Instagram-worthy views.

Refuel at the Chocolate House.

Refuelling is a very important part of exploring for me. Straight opposite the Palace, you will find The Chocolate House. This place is not for those who have embraced Sugar-free or calorie counters. Selling a range of sweet treats and drinks to eat in the incredibly pretty café or to take home, this is a temple to indulgence. If you’ve explored the Casemates, you’ve probably earned it anyway. Sit outside to people watch and soak up the beautiful view of the Palace.

Soak up the Atmosphere at Place d’Armes

This is the heart of the pedestrianized old town and also a social hub. The square and the streets leading off it and packed with cafes, bars, restaurants and boutiques. In the summer months there is a programme of live music and entertainment. Don’t forget to look up, either, the architecture is beautiful with some quirky details including a golden Unicorn head. Cant have too much of that sort of thing, in my opinion.

Get a Birds Eye View at Place de la Constitution

The memorial with the ‘Gelle Fra’ (The Golden Lady) is a must see. You will also get some beautiful city views from here. But if you want to literally up your viewing game, take a ride on the Sky Tower. This will lift you 80m into the air for the ultimate, all round view of the city and beyond. This is a temporary attraction for Summer 2017.

Reflect at the National Monument of Solidarity

This thought-provoking monument is a tribute to the fallen of WW2 and to the Resistance and solidarity shown by Luxembourgers in the face of Nazi Occupation. The inner courtyard represents concentration camps and barracks, the rough stone all victims of war. In front of this burns an eternal flame.

Wander or Rest in a City Garden

The biggest surprise for me in Luxembourg was how much leafy, green space there is. There are gardens and parks galore and they make a great place to stroll or rest. Possibly with a little something from the aforementioned Chocolate Café.

Just outside of the city you will find the American Cemetery Memorial. Here lies General Patton, thousands of American soldiers known and unknown and one female nurse. A visit to this beautifully kept memorial is very humbling and very worthwhile. 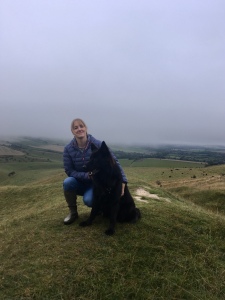 When your country living, dog walking life makes dressing up mean putting a nice fleece on for the morning walk 🤷‍♀️😂
Green is for balance, harmony, hope & energy 💚
After a ridiculously mild Winter, finally getting the crisp and frosty mornings The Wolf and I love so much ❄️ He is made for this 😊 🐾
Happy New Year 🥳
Met this beauty today. Absolutely stole my heart 😍 Determined to see one of these magnificent creatures in the wild one day #greywolf #wolf #wolfspirit #longleat #drivethroughsafari #lovewolves #hellowolf #animals #familytime #naturecloseup #animalsupclose #wiltshire #timeforwiltshire #longleatsafari @longleatofficial
Heading over to Richmond Park today to blow away the cobwebs. Or wash them away, looking at the weather 🌧🌂
Winter afternoon walks, fading light and skeleton trees. Absolutely love winter walks, out in the fresh air and then home to hot chocolate and all the Christmas lights making the place twinkly and cosy 😊
Been wandering around pretty little Pewsey this week and this gorgeous old building caught my eye. Thatch, timber frame, a wreath... it’s got everything 😍 including a little peek-a-boo door set into the big one. Swipe to see.
I love a German Christmas Market. The atmosphere, the colour, the food, the shopping. Wooden huts, twinkling lights and usually a lovely (and sometimes live) Nativity.
I don’t usually post pictures of me on here, but I thought since I’ve had a flurry of new followers lately ( thank you, appreciate you all! 😊) I’d get my mug on here.