What do get if you take five people, one city and about three-and-half-hours in which to see a little something of the place? The answer is, a quick dip into Norway’s capital Oslo. In my last post I chattered a bit about our recent Color Line Minicruise and part of this high seas experience was some time ashore in Oslo.

A bit less than four hours, I hear you say…perhaps you are questioning if its even worth it. I hear you, I  wondered the same myself. I didn’t want to end up wandering round the docks feeling like we’d missed out on actually seeing anything. I’ve seen the docks of many port cities – there’s a statement that could earn a girl a reputation – and they generally aren’t much to write home about. The thing with Oslo is,  thanks to its geographical location and a bit of clever engineering, the cruise ship puts you right into the city. So time ashore is not time wasted, especially if you do a little planning. Still not convinced? Look at what we managed to fit in…

We disembarked at 10.00 and it took us about fifteen minutes to get off the ship and through Passport control. We picked up a taxi from the cruise terminal to our first destination, the  Magic Ice Bar. Actually, we were a touch early as it didn’t open until 11.00, so we killed twenty minutes wandering the surrounding streets and admiring the National Gallery. Even if you don’t venture in, there are several sculptures dotted around outside and the building itself is worthy of admiration. The griffin type creatures up on the top were suitably Harry Potter-esque to rate approval from my 11-year-old. 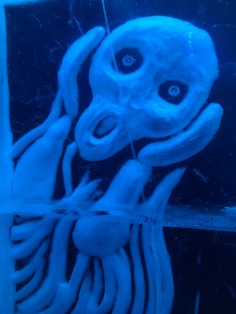 From historical art to ice art. Hello, ice bar. I have wanted to visit one of these for years, so when the option to book tickets as an add-on to the minicruise popped up, I booked up quicker than you could say ” the cold never bothered me anyway”. The experience did not disappoint. After layering up in arctic robes and gloves over the top of our normal outdoor gear we ventured into the bar itself. You know logically its going to be cold but it still takes your breath away at first. We spent about forty minutes exploring the sculptures and enjoying the atmosphere (not to mention the very quaffable wine and cloudberry liqueur cocktail) before it got a bit much for my youngest and we called it a day. This is an experience that, by definition, you dont spend to long on but that  means it lends itself well when you are short on time.

From the ice bar it is a pleasant stroll to the Royal Palace and the surrounding parkland known as the Slottspark. The park is actually a few years older than the palace itself and has been open to the public since it was completed, making it unique in Europe. The palace is pretty understated as royal homes go, and the atmosphere around it seemed pretty relaxed. Even the royals in this part of the world exude Scandi-cool.

To the front of the palace lies the Palace Square, with its imposing statue and views across the city. Here you’ll spot the Royal Guardsmen  in full regimental finery. Interesting FYI: the Royal Guards official mascot is a penguin by the name of Nils Olav who currently resides at Edinburgh zoo.

The path out of the Slottspark took us past the old stable blocks, now used as an arts venue. The building is incredibly grand given its former use and there are some information boards alongside giving details and images of the stables history.A short walk from the stables, en route back to the ship, we passed the Norwegian Nobel Institute. 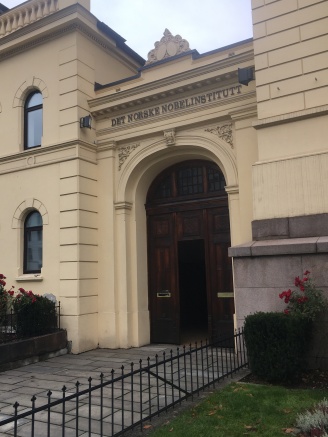 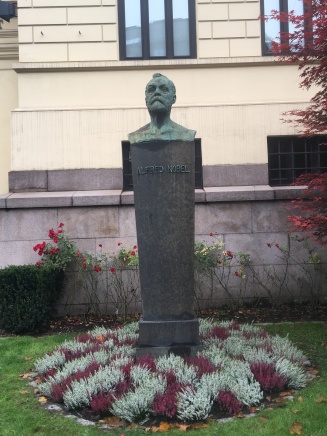 Wandering back down towards the docks we cut through the Aker Brygge marina to get back to the ferry terminal. This is an area that has been thoroughly regenerated in recent years and is now home to lots of places to eat, drink and shop. Not to mention some interesting artwork. We didn’t explore fully as time was against us but it gave us a little glimpse of the modern face of this multifaceted city. 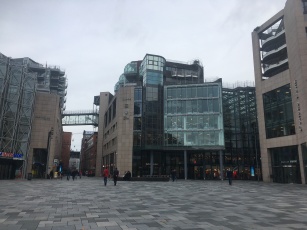 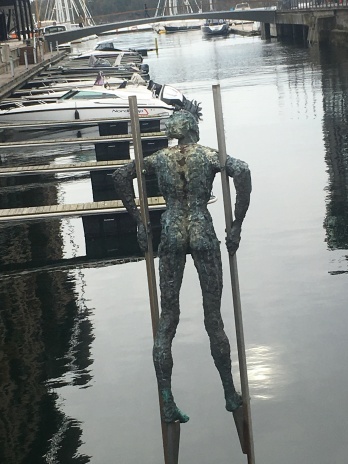 Aker Brygge is just a short walk from the Color Line terminal, where reboarding is a breeze as you don’t need to check in or navigate passport control, you just have to be back on board for 13.45 ready for a 14.00 departure. We just made it back in time to grab snacks and drinks and get back on board.

I’ll end as I began. What do get if you take five people, one city and about three-and-half-hours in which to see a little something of the place? The answer is five tired but contented travellers who very much enjoyed visiting Oslo, brief though our time ashore was.

One thought on “Ashore in Oslo”