Living in Germany as an army wife has been- still is- quite the adventure. In fact, we liked  living in Germany so much that, having left for a two-year posting to the UK, we came back for more. Being part of the British Forces Germany (BFG) community has been a real experience with enough fun times and opportunities to outweigh the frustrations and difficulties. But all good things must come to an end and not only is the end of our posting on the horizon, but also close of business for the British Army in Germany. We are leaving, barracks  being handed back and so will come to a close a unique and over-seventy-year-long chapter in Anglo-German relations.

To mark the end of an era, the Stadt Museum in Paderborn has put together the ‘British in Westphalia’ exhibition, exploring the lives of military families who have been part of the BFG community in this part of Germany and the changing relationship between the British and the German people.  The exhibition is a blend of interviews, recollections and exhibits ranging from military equipment to a recreated room of a German Married Quarter, complete with army issue curtains and furniture.

The beginning is always a good place to start and so the exhibition starts at the end of WW2. Did British troops come here as liberators or Occupiers? I suppose it depends on where you stood. They certainly set out to make their presence known with victory parades, requisition of homes and actions designed to force the German population to confront the reality of all that had taken place, including forcing adults to watch footage from liberated concentration camps. Images from this period are hard-hitting.

As a wife who has accompanied her husband throughout his career, the most surprising thing for me was just how early families were able to join their soldier in post war Germany. The first wives arrived in 1946. I’m sure having endured years of air raids and rationing at home and then joining their husbands in a country rebuilding itself , they knew their share of hardship and challenge. They must have been tough, resourceful women.

Over time the German and British communities became less suspicious of one another and had more opportunities to mix. Inevitably, this led to relationships between local girls and British soldiers. It doesn’t  raise an eyebrow now, but in the early days couples met with resistance, from their own communities and the military chain of command. A German bride recalls being called a ‘Tommy Tart’ when she began courting her now husband. Another exhibit details the story of a soldier who was moved miles away by his bosses to prevent him marrying his German sweetheart. He came back for her, and married her anyway. Happily, both stories had a happy-ever-after. Love conquers all.

Military families in Germany found themselves once again living in uncertain times as the Cold War raised tensions within Germany and beyond. Families were issued with evacuation procedures and notes on what they should bring. The list included ‘sandwiches, a radio (battery operated if possible) and an over coat or anorak’. Seems quaint now but I’m sure it was a frightening prospect at the time. Apparently, some wives kept a suitcase packed and under the bed, ready to move if called upon to do so. The Soviet threat was believed to be very real. 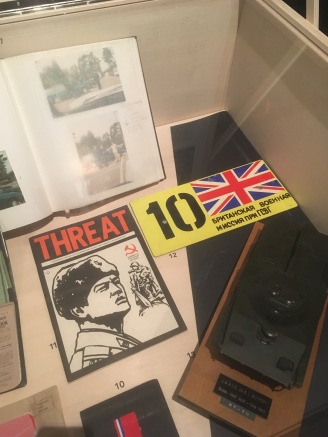 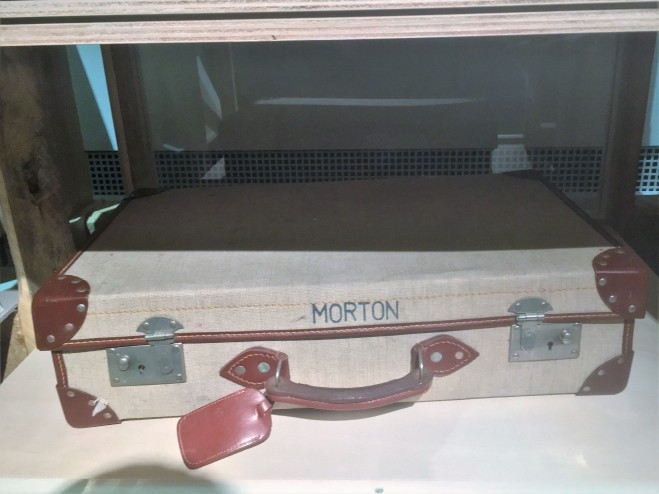 That threat may be gone ( possibly debatable but lets not get political) but some themes that run through military life never change. One section of the exhibition deals with the topic of separation and how military families cope with time apart. There were lots of exhibits that struck a chord with me, including a copy of a book called ‘My Daddy’s going Away’. I have read that book many times, so much so I know it off by heart. I still can’t get past page three without running the risk of  leaky eyes, though.

Other exhibits deal with the antics, sometimes entertaining and sometimes questionable, of the soldiers themselves. A newspaper clipping details a pub fight that turned into a mass brawl involving nineteen soldiers. Pubs and clubs were great for getting people together but also a place where tensions could boil over.  My sons favourite exhibit was a chamber pot turned into a hat as a leaving gift to an officer from his junior soldiers. Squaddie humour, it seems, is not far of that of a six-year-old. I hope the gift was received in the spirit it was given. Looking at all these snippets and snapshots and thinking of the soldiers I have met (including my own!) it seems that the face of the army might change but a soldier is a soldier, no matter when or where they are.

If you have any connection with BFG, or an interest in military history, this exhibition is a must-see. Even if you don’t have a personal connection ,exhibitions like this one are a glimpse into what can be quite an introverted and misunderstood world, that of the military and the military family. This exhibition runs until February 28th, but seems to have enjoyed great success so I do wonder if it will go on the road at some point.

I will be sad to leave Germany and sad to see the end of BFG.  My youngest child was born here. Being forced to adapt to living here, usually minus the husband, has taught me a lot about myself. When the British army arrived in 1945 I don’t think anyone imagined they would stay for over half a century and become friends and neighbours. As time went on, it became unthinkable that they would ever leave. The British in Westphalia exhibition is a tribute to the journey of the British Forces in Germany and all that have played a part in it.

The exhibiton British in Westphalia can be found at the Stadtmuseum in Paderborn. There are limited flights from the UK into Paderborn Airport, but it is easily accessible from Dusseldorf International by train.

2 thoughts on “Exhibition: The British in Westphalia”

Image from my visit to Imber Village at the end of last year. Known as the ‘Ghost’ or ‘Lost’ village, it was evacuated by the MoD in the 1940s and residents were never able to return. If walls could talk,eh? . On a side note, I’ve read a lot about the negatives of army-wife-life of late, so I’m kicking off the coming week with some positivity. I love getting out and exploring. It’s one of the biggest plus points of being a military wife , that we get to call different places home. Every move opens up a whole new set of opportunities. It’s a real privilege. ‘Tis all what you make it... #imbervillage #salisburyplain #ww2history #alwaysexploring #armywife #milspo #darlingweekend #letsthinkpositive #discoverunder1k
#tbt time...back to long Summer days exploring the @herrenhaeuser_gaerten in Hannover. If your looking for a budget friendly, vibrant city for a short break...look no further #hannover #germany #visitgermanyofficial #herrenhausen #gardensofinstagram #gardensofeurope #summer #lemontree🍋 #instablog #discoverunder1k #travelblogger #lifestyleblogger #instapostcard
Despite the fact the sun is shining - at least here in Wiltshire- today is said to be gloomiest day of the year. I'm not sure about that, but here's a pretty blossom shot from last spring in Edinburgh. A gentle reminder the days will get warmer and longer. Spring is coming. Have a wonderful Monday ☺️ #mondaymotivation #blossom #instaflowers #instablossom #Pink #petals #edinburgh #springiscoming #instapostcard #discoverunder1kuk #travelblog #lifestyleblogger #armywife
Not sure what it’s like where you are but where I am, the weather is pretty dire. Definitely an indoors sort of day. The @litandphil in Newcastle would be the perfect place to squander a few hours in the dry & warm today. How did I live in Newcastle for so long and yet only discover this place last year? #newcastle #ne1 #northeast #library #secretlibrary #history #librariesofinstagram #librarylife #travelblogger #armywife #discoverunder1kuk
First snowdrops of the year spotted at Lacock Abbey. Lovely sight in a lovely place 😊 #sundaystroll #snowdrops #blooming #flowersofinstagram #darlingweekend #lacockvillage #lacockabbey #nationaltrust #history #heritage #timeforwiltshire #armywife #wiltshirebased #squaresofmylife #travelblogger #discoverunder1kuk
More flowers and from another English village. Spotted this lovely wreath on the door of St Giles Church in Imber village on Salisbury Plain. . . Bit of a back story with this one though as Imber has been uninhabited since the 1940s when the community was evicted so the village could be taken for military training. Full story and pics in a new blog post, link in bio. #wreathsofinstagram #flowersofinstagram #springblooms #springcolour #imbervillage #imbervillagechurch #lostvillage #history #heritage #wiltshire #adventuresinwiltshire #mywiltshirelife #blogger #wordpress #linkinbio