I’m taking a deep breath before I write the following statement. Here goes: I’ve always loved to travel, but I used to think the UK was a bit second best. Don’t get me wrong, I always knew there were some nice places in the British Isles, but I definitely thought going abroad was better. Holiday at home? Nice enough, but not a proper holiday. Then I moved away. First to the other end of England, then onto foreign shores. And something happened. Maybe absence made the heart grow fonder, maybe I grew up a bit ( had to happen sometime), maybe returning ‘home’ as a visitor gave me a new look at things. I realised, the UK is bloody brilliant. Bursting at the seams with places to be and things to see. And now I’m back on British soil for a little while, I’m on a mission to rediscover the UK.

Home for the moment is the Scottish capital Edinburgh, and as well as being a great place to be in its own right, it also makes a fantastic base to explore both Scotland and the North of England. Just three miles from the Scottish border lies Berwick-Upon-Tweed. My daughter was visiting from Newcastle so it was decided that we would meet her off the train at Berwick and do a bit of exploring. It’s about the journey, and all that.

Berwick is the proud owner of a turbulent history, having changed hands time and again between the English and the Scots during the Border Wars. Being a focal point for fighting shaped the structure of the town, with yesteryears defences becoming one of today’s attractions.

The Elizabethan Walls were built to defend against marauding Scots. The only example of bastioned town walls in Britain and one of Europe’s best preserved examples, the mile or so long walk along them offers a fascinating glimpse into Berwick’s past and stunning views out across the North Sea and the Tweed Estuary.

Centuries of war might have shaped it,  but Berwick is now a peaceful place full of cobbled lanes and quirky streets. Where invaders were once held out, visitors are now welcomed in to explore the many historical sites, independent shops and places to eat and drink. All the information you need to plan a trip to Berwick can be found on the Visit Berwick website.

Leaving Berwick behind (reluctantly, with plans to return soon) its a ten minute drive up the coast to the historic A village of Eyemouth. Being honest, we ended up here by accident. We were trying to find a somewhere else and, well, we didn’t. So Plan B involved following the signs to Eyemouth harbour. And it turned out that getting lost led to a bit of a find.

Set on a natural harbour, fishing in Eyemouth goes back to the 13th Century. But like many coastal communites, Eyemouth really came into its own in the 18th Century when high taxes to fund the government war chest led to a thriving smuggling scene. A local merchant by the name of John Nisbet – merchant by day, smuggler by night- was at the heart of the illicit economy and he had a house designed to meet the needs of his trade. Gunsgreen House is said to be full of hiding places and secrets. Sadly, its secrets are safe for now as it doesn’t open til Easter. It’s on the list of places to get back to. 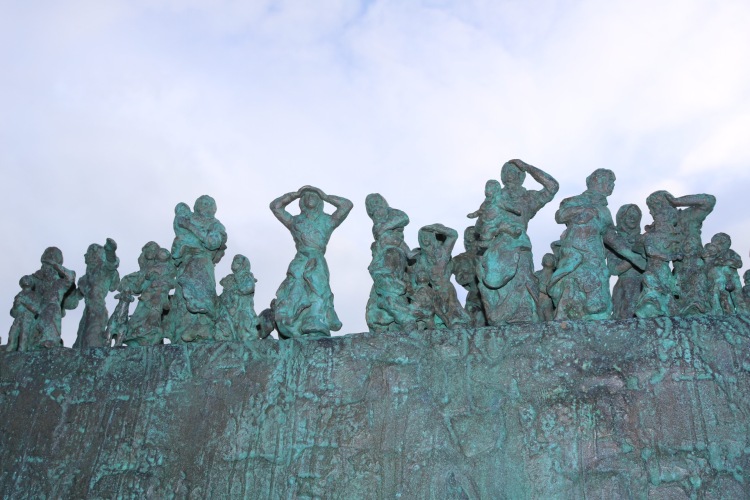 A short stroll from the harbour along the promenade brings you to the poingant Black Friday memorial, a sculpture commemerating families who were affected by Scotland’s worst fishing disaster in 1881. A total of 189 men were killed and the majority of them came from the town itself. The disaster created 78 widows and 182 fatherless children. The bronze sculpture, named Widows and Bairns, is made up of a series of individual figures and each one represents a real person.

Below the promenade lies a sweep of clean, sandy beach. If the tides out, as it was when we visited, the far end of the bay is more rugged and full of rock pools. Perfect for exploring and general messing- about- on -the -beach. With its harbour, history, narrow wynds and rugged bay Eyemouth is like something lifted straight off the pages of an Enid Blyton story. I can’t wait to go back, its the perfect place to create your own little adventure. Lashings and lashings of ginger beer, anyone?

Thursday walks with the wolfy one 😊 Love having all the open space here but can’t lie, doing all the dog walking when the husband is deployed can get a bit wearing.
Sunny shot from yesterdays wander round Tedworth house since today is 🌧.
Prague views, day and night.
Saarburg street views 😍Pretty buildings, geraniums and potted fig trees. Love this part of Germany.
About that time we went walking through the vineyards...
More poppy spam and I’m not a bit sorry. They are everywhere at the moment and aren’t they glorious?
That pretty time of year when the fields are sprinkled with yellow and red. Pretty views on the morning walk 😊
Found a friend on the morning walk. Didn’t say much but liked a little scratch 😊
You’d never know it but behind this handsome red brick exterior is a fabulous cafe/bar and a cracking independent cinema. Gorgeous terrace for pre-movie drinks, too 🍻
Flower blooming beautifully after the rain. Can’t think of a caption, so hope you’ll just enjoy the image. Spotted on the morning walk with @littlewolfrocky, who didn’t care for the flower but found a good stick 🐺🐾