Let’s begin with a story. Once upon a time , a long time ago, there was founded a priory. Said priory was the proud holder of the forefinger of John the Baptist – who knows where the rest of him ended up- and a destination for pilgrims. The Priory stood strong and prosperous until Black Death and dissolution of the monasteries finished it off. The End.

Only, it wasn’t the end. In Tudor times the priory was transformed into a grand house, and so began a stylish redevelopment, one that would see Mottisfont transformed from a country home in disrepair to a stylish and comfortable retreat. I knew this place was going to be special even as we drove past the old gates, which are mounted between stone gate posts topped with an imposing pair of bears. I have no idea of the significance, if any, but that’s a bit statement, isn’t it? A bit extra.

In the 1930’s, the house became home to the Russell family. Maud Russell was quite the woman; society wife, intelligent, stylish and well respected for her knowledge of the contemporary art scene. Under Maud’s supervision, the house became a haven where artists, writers, poets and ‘ Bright Young Things’ were welcomed. Just imagine the atmosphere at a 1930’s house party…cocktail, anyone?

I’d love to be wow-ing you with beautiful images of the inside of Mottisfont and the work commissioned by Maud. Sadly, I visited just as the Covid-19 situation began. The National Trust had taken the decision to close the house and parts of the grounds in order to maintain social distancing measures. Mottisfont is only a short drive from home for me, so it’s nice to have a return visit to look forward to when restrictions begin to lift. The grounds themselves are a work of art, though.

After a stroll around the grounds and garden, we decided to push out and walk the dog in the fields around the house. Partly so we could get the dog off  lead and partly because of the whole social distancing thing. Strange to think now that social distancing was something we’ve had to learn, given that it’s a way of life now. For most people, anyway. 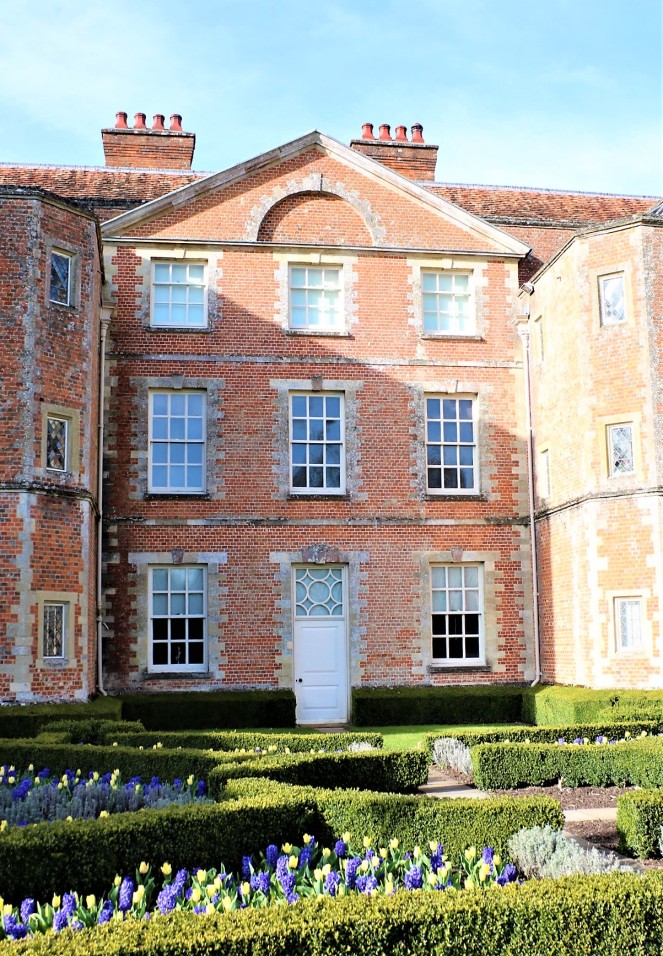 There are miles and miles of open land and rolling fields surrounding the formal lawns and gardens. I’m sure you could pick up a map if you wanted to scope out some proper walking routes, but we just did the usual ‘no idea but see where we end up’ approach. So we walked there and back to see how far it was, and let the dog stretch his legs. As well as being a lovely walk on a lovely day, it yielded a little treasure. Mr THL spotted this deer skull complete with antlers and even a few teeth. Major brownie points- I love this kind of thing. I mean, I like flowers and perfume also…but this kind of find is next level. 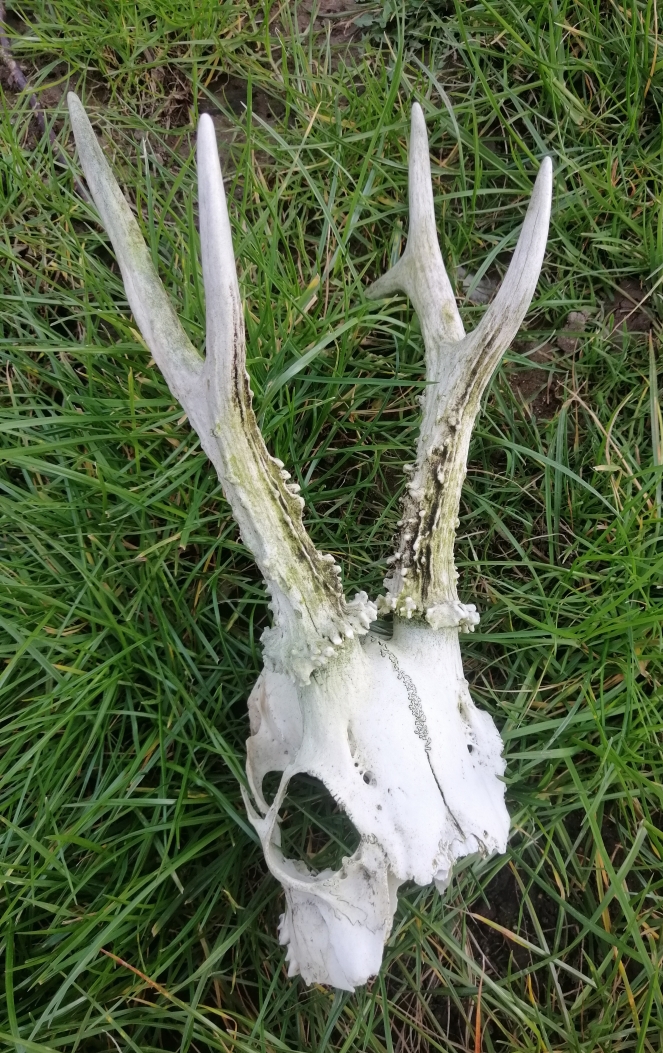 I don’t know when I’ll get back to Mottisfont. Sooner rather than later I hope, if restrictions can be safely lifted. There’s something comforting  about having a return visit to look forward to. Historic houses like Mottisfont have stood through testing times and they’ll be there when this testing time has passed. 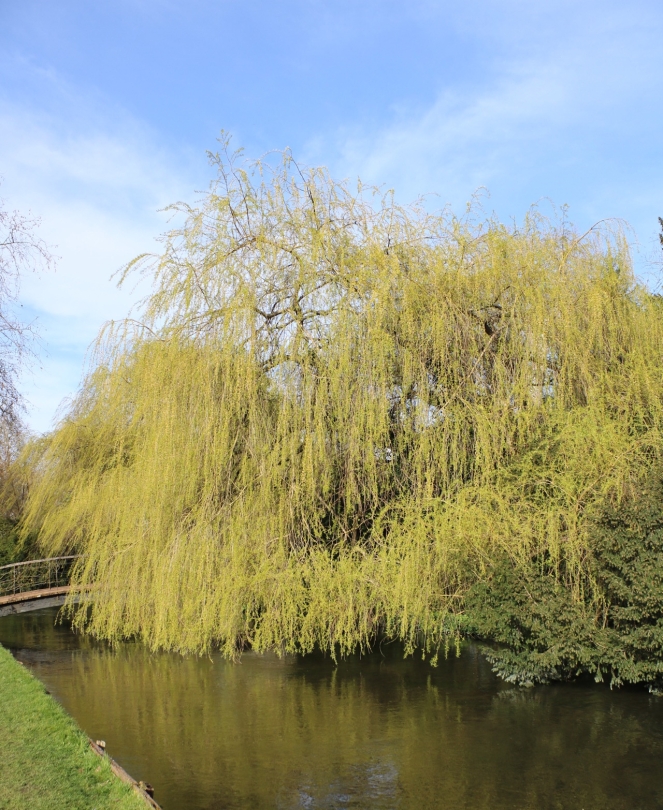 When the restrictions begin to lift and we can start to visit places like Mottisfont again, I’m going to invest in a National Trust membership. I’ve gone back and forth on getting one for years. I wasn’t sure I’d use it enough , we were in and out of the UK on different postings and so on. Being forced by circumstance to stay home has made me realise how much joy there is in being able to visit historic homes and beautiful spaces. How much happiness is to be found in these places full of colour, beauty and history. Imagine how much would be lost if not for charities like the NT?

And, when it’s safe to do so, I’m sure these places will appreciate seeing us just as much as we will them.

#militaryspousephotochallenge Day 18: Creative.
Spent a lovely day discovering Langport in Somerset, possibly the friendliest place I’ve been since we moved back to the UK. Also home to some gorgeous views, river walks, independent shops and the nicest latte and caramel shortcake ever from @little_bakery_langport 😊 #visitlangport #langportsomerset #visitengland #visitsomerset #shoplocal #indiebusiness #shopsmall #sweettreat #coffeeandcake #exploreeverything #armyfamily #pink #pretty #somersetlife #langportfood
Have you heard of Champing? It’s Overnight camping in historic churches, church plus camping equals... yeah, you see where I’m going.
Can’t decide if I’d rather live on a canal boat or in a pretty canal side house like this one? If the Mr and I were boat dwellers I like to think we’d be like Tim & Pru from Great Canal Journeys. But if we lived canal side I’d be swanning around in dungarees and gardening in the style of Tom & Barbara from The Good Life 👩‍🌾
#militaryspousephotochallenge day 12: Temporary.
He has the world at his feet ... well maybe not the world, but look at that gorgeous view across Winchester. First family day out in a long old time was a walk round this little gem of a city. It’s got history, charm and character in bucket loads. Can’t wait to get back and get to know the place while we’re posted down here. Love it when you discover a place that just captures you 😊
#militaryspousephotochallenge Day 8: Magnolia
Day 6 of the #militaryspousephotochallenge and the prompt is ‘moving’. I know a thing or two about moving to follow my soldier, we’ve made 6 moves in 11 years and three of them were in the past 4 years. It’s been a ride 😅
Happy Easter Sunday 😊 thoughts and positivity to those who are celebrating without their loved ones for whatever reason.
Flower Friday, Spring blooms in up lifting colours. I wish Instagram had a scent function, these little beauties smell gorgeous. Happy Easter weekend 😊